Onboard Maiden: A sailboat, an adventure, and a cause

The cure for anything is saltwater—sweat, tears, or the sea. – Isak Dinesen

Perhaps it is a bit of a cliché, but I’ll admit that this is one of my favourite expressions. It came to mind when I first heard the story of Maiden in 2014. At that time, Tracy Edwards, the original skipper of Maiden, was trying to raise money to salvage the derelict and abandoned sailboat that she and her all-women crew had raced in the Whitbread Round the World Race in 1989 – the first women ever to do so. For those who do not know the story of Maiden and its original crew, it is a remarkable and inspiring story of courage, empowerment, and achievement. The stuff of legends, actually. As I was very much alive and well in 1989 and interested in sports (and a feminist), it surprised me (but not really) that I had never heard about Maiden before. It is an unfortunate reality that the successes of women seldom get the attention they deserve, media and otherwise. Thankfully though, due to the tenacity of its original crew and an amazing new documentary, the incredible story behind the 1989 Whitbread Race is having a renaissance. And so too has Maiden itself.

After a successful fundraising campaign to buy the boat back and restore it to better than brand new, Maiden is now on a three-year worldwide tour with a new, all-women crew. It began its journey in November 2018 and has already completed more than 20,000 nautical miles. Its current mission is to raise awareness about equality issues (in sailing and generally) and, importantly, to fundraise for charities that support the education and empowerment of girls around the world. I loved everything about this! So when I heard last year that Maiden was accepting applications for guest crew and would be making one stop in Canada on its tour, I was excited to apply. While I have never been a racer and my sailing experience is limited to mostly day-sailing, the opportunity to be even a wee part of Maiden’s history and to help spread its message that “anything is possible” was too irresistible to not apply.

So with incredibly good luck and excellent timing, I was fortunate to join the crew for its short, but very beautiful leg from Vancouver to Seattle. I arrived in Vancouver on August 4 and, after a couple of days aboard (which included a shakedown cruise and some emergency maneuvers, getting us and the boat ready, and talking with a number of visitors about the boat – so fun!), we departed on the afternoon of August 6 for Seattle after a lovely departure ceremony conducted by Wes Nahanee, from the Squamish Nation, and representatives from the Pulling Together Canoe Society.[1]

Our trip to Seattle took us about 17+ hours, arriving on August 7. We enjoyed a stunning sunset as we sailed down the Strait of Georgia. As night fell, the breeze and cold arrived (and I mean, really cold). Then the fog descended. Halfway through the night, we also encountered 4-knots of current that knocked the boat around quite a bit and lasted until about 6:00 a.m. One of Maiden’s permanent crew described this part of the trip as basically white water rafting, but in a very large boat. As I had finished my watch at 2:30 a.m., I only had one job after that time – do not get seasick (I did not). After dawn, we all moved up to the deck and completed the ceremony started by Wes Nahanee in Vancouver – releasing into the water the cedar branches he used to brush the boat to cleanse it and prepare it for its journey. Several hours later, we arrived in a foggy Seattle, sleepless but, for me, happy with the adventure and to be part of Maiden’s legacy.

I am so grateful to the Maiden Factor and Maiden’s amazing crew who welcomed me aboard – fierce, talented women from whom I learned so much in such a short time. If you are interested in learning more about Maiden or to make a donation to the Maiden Factor Foundation, visit www.themaidenfactor.org.[2] Educate a girl – change the world. 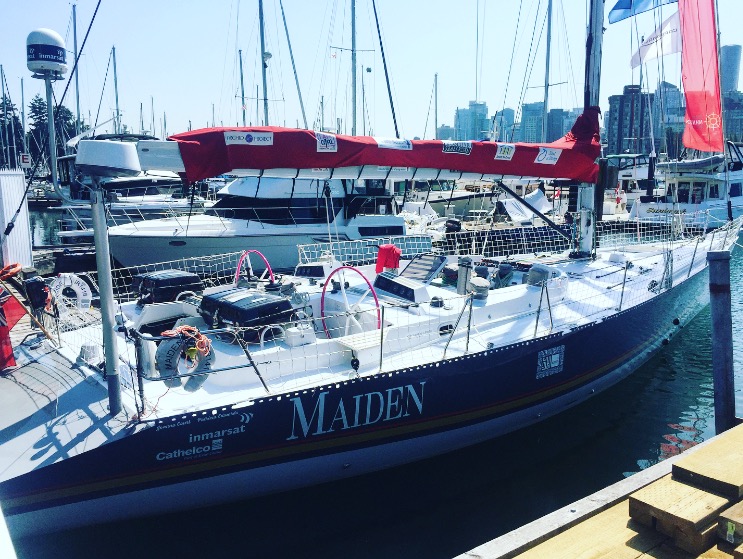 Maiden at the dock 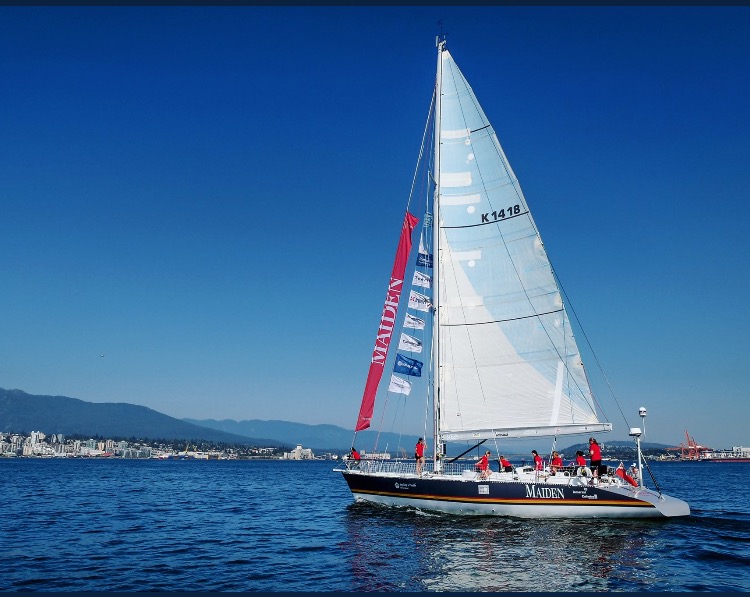 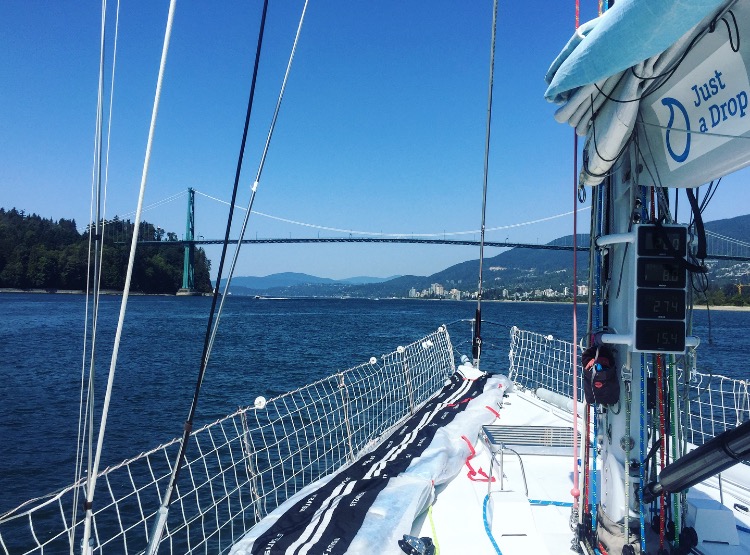 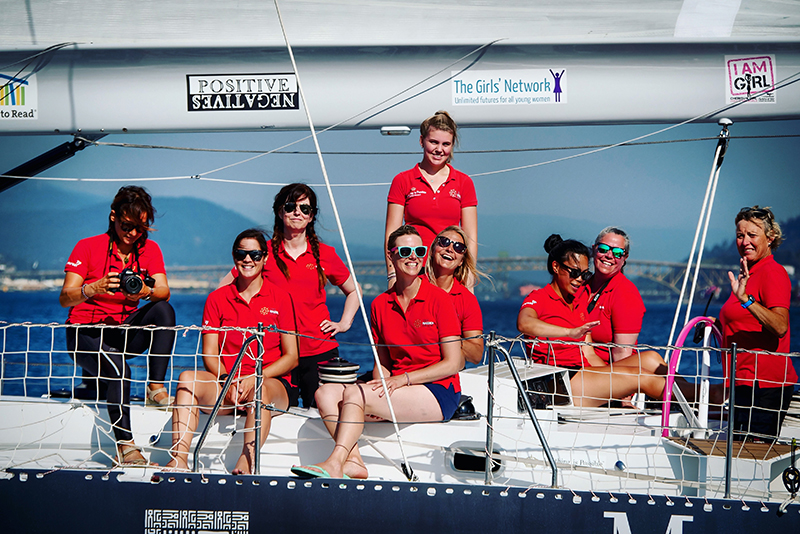 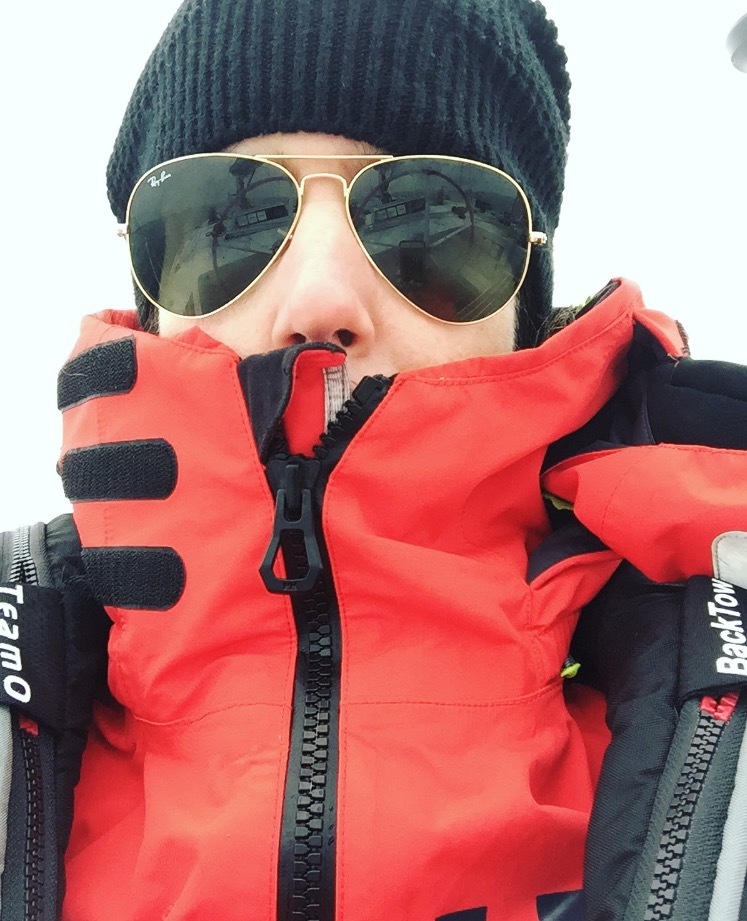 Did I mention it was cold? 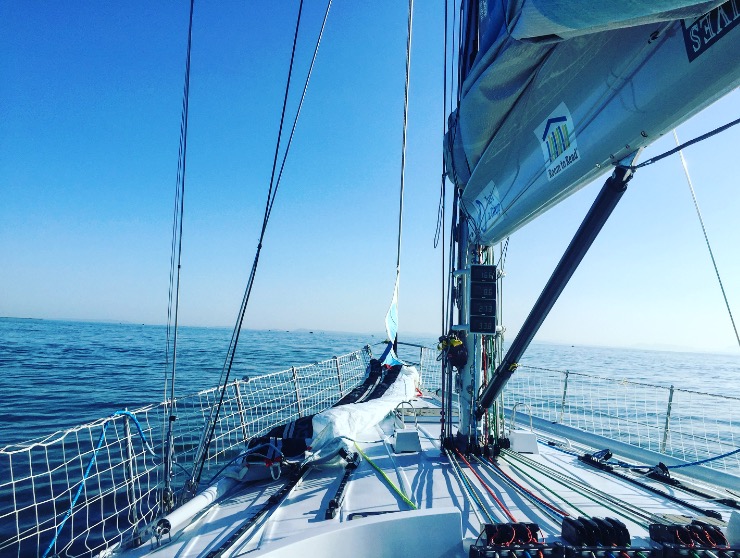 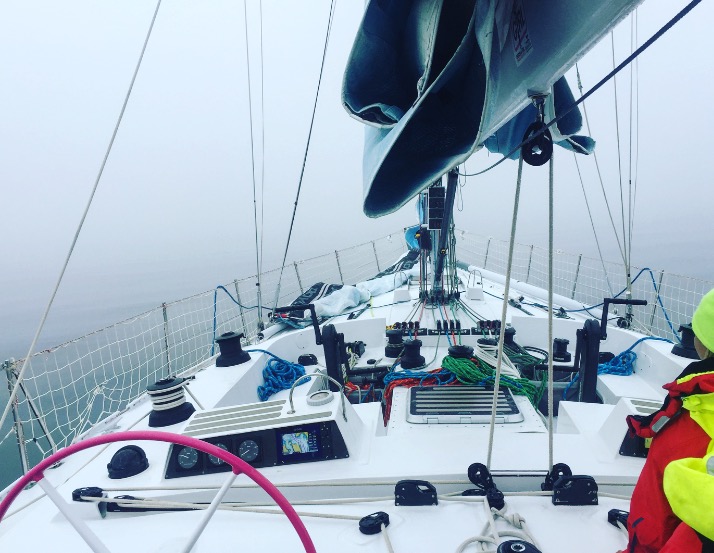 [1] This a local organization that brings together First Nations communities, police, public agencies, and youth to organize various initiatives and events that foster respect and reconciliation (www.pullingtogether.ca).