Promises to Repair and Limitation Periods: Extending the Time to Sue

A recent decision of the Court of Appeal shows that a defendant’s promise to fix a problem may extend the time limit for bringing a proceeding under Ontario’s Limitations Act, 2002 (“Act”). Earlier cases established the principle in matters relating to professions with a high degree of expertise, such as medicine, law and accounting. In Presley v. Van Dusen, 2019 ONCA 66, the Court has now broadened the approach to include any situation where, after discovering a serious deficiency, a plaintiff reasonably places reliance on a service-provider’s promise to take corrective steps.

Significantly, the Court also applied the extended limitation period to a co-defendant regulator that did not interact at all with the plaintiff and made no assurances of repair. The Court exhibited a wish to minimize the need for litigation and found that it made no sense for the limitation period to be suspended for one defendant, but not the other.

The plaintiff homeowners, Ms. Presley and Mr. Frederick, retained the defendant Van Dusen to install a septic system in 2010. The co-defendant, Leeds, Grenville and Lanark District Health Unit, approved the proposed septic system that same year. Problems with the operation of the system soon developed. In the spring of 2011, the plaintiffs called Van Dusen when the system began to smell. He appeared to fix the problem by replacing a failed sewage pump. There were further odour problems in the spring of 2012, but Van Dusen said the cause was an unusually wet year. In the spring of 2013, there were issues with both smell and effluent, but Van Dusen advised that the problem could be fixed by applying a load of sand to part of the septic bed. He assured the plaintiffs that he would return to perform that work.

Van Dusen came with sand in the fall of 2013, but the plaintiffs were not at home so he was unable to access the property. He failed to come again in the spring of 2014 because of mud on the appellants’ property. In the winter of 2014, Van Dusen failed to come although the plaintiffs had several discussions with him about coming and they plowed the snow to give him access to the property.

In August 2015, approximately five years after the system was originally installed, the plaintiffs sued Van Dusen in Small Claims Court, seeking damages for the premature failure of their residential septic system. They added the Health Unit as a defendant in January 2016.

The decisions of the lower courts are based on subsections 5(1) and 5(2) of the Act which, for ease of reference, read as follows: 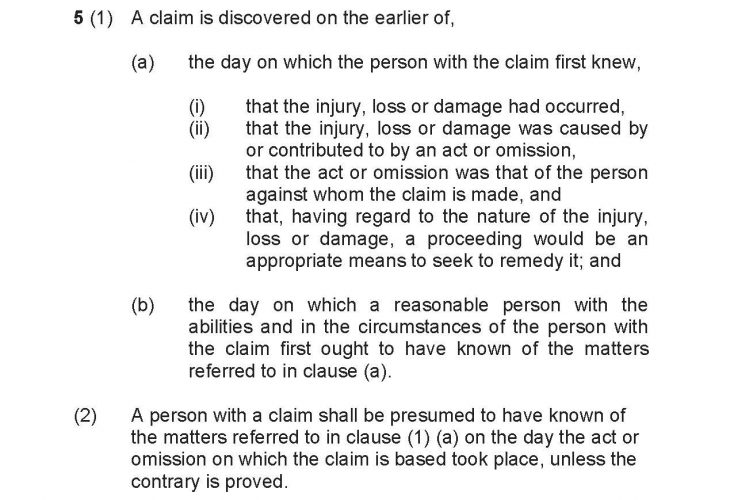 At trial, the trial judge dismissed the action on two grounds.

First, the trial judge found that the plaintiffs were aware that a loss had occurred in the spring of 2013. Applying subsection 5(1)(b) of the Act, the trial judge concluded that a reasonable person with the abilities and in the circumstances of the plaintiffs ought to have known of all the elements set out in subsection 5(1)(a) of the Act (i.e., a loss, an omission, the defendant’s responsibility, and an action being an appropriate remedy) by the spring of 2013.

Second, the trial judge also applied the statutory presumption in subsection 5(2) of the Act, holding that the plaintiffs had not led sufficient evidence to displace it. Accordingly, the plaintiffs were presumed to have known of all the elements referred to in subsection 5(1)(a) on the day the act or omission on which the claim was based took place.

On appeal to a single judge of the Divisional Court, the Court found no error with the trial judge’s decision on either ground. In particular, the Divisional Court agreed with the trial judge that there was no requirement to make an explicit finding as to what the plaintiffs actually knew in relation to subsection 5(1)(a)(iv) (i.e., a proceeding being an appropriate means to seek a remedy) given that the trial judge had already made the determination about what a reasonable person with the abilities and in the circumstances of the plaintiffs ought to have known under subsection 5(1)(b).

The Court of Appeal’s Decision

The Court of Appeal allowed the plaintiffs’ appeal. It held that both the trial judge and the Divisional Court judge erred in law by failing to conduct the required analysis under subsection 5(1)(a)(iv) to determine, in the language of the statute: “that, having regard to the nature of the injury, loss or damage, a proceeding would be an appropriate means to seek to remedy it”.

The Court of Appeal found that the analysis of both the trial judge and the Divisional Court of subsections 5(1)(a)(iv), 5(1)(b), and 5(2) of the Act was inadequate. The trial judge explicitly stated that he was not considering 5(1)(a)(iv). But the Court of Appeal held that a determination under 5(1)(b) as to the date a reasonable person would have discovered the claim requires consideration of all four “matters referred to in clause (a)”. Similarly, the finding in the courts below that there was insufficient evidence to rebut the presumption under subsection 5(2) that the plaintiffs knew all the matters referred to in 5(1)(a) could not stand because the lower courts failed to specifically address subsection 5(1)(a)(iv).

The Court of Appeal stated (at para. 25): “This court has repeatedly held that consideration of when a proceeding was an appropriate means to remedy a claim is an essential element in the discoverability analysis and that failure to consider s. 5(1)(a)(iv) is an error of law”.

Because neither the trial judge nor the Divisional Court considered the application of subsection 5(1)(a)(iv), the Court of Appeal engaged in the analysis. In doing so, it stated the following principles:

(1) Subsection 5(1)(a)(iv) deters needless litigation. If a legal proceeding is not yet “an appropriate means to seek to remedy”, the start date for the commencement of the limitation period is postponed beyond the date on which the elements of the claim are discovered.

(2) A legal proceeding may not be “appropriate” in cases where the plaintiff is reasonably relying on the superior knowledge and expertise of a defendant who is engaged in good faith efforts to correct the wrong that the defendant caused. The ameliorative efforts may render a proceeding premature.

(3) Reliance on superior knowledge and expertise sufficient to delay commencing proceedings is not restricted to traditional expert professions such as medicine, dentistry, law, or accounting.

The Court of Appeal applied these principles to the case before it and allowed the appeal. In the Court’s view, even though the plaintiffs might be criticized for not being more insistent that Van Dusen fulfill his promises, the evidence established that there were ongoing assurances upon which the plaintiffs reasonably relied. The facts of the case brought it within the situations contemplated by subsection 5(1)(a)(iv) and the “reasonable person” test in subsection 5(1)(b) was also satisfied. The Court held that a person in the plaintiffs’ position would not reasonably have known that a proceeding would be an appropriate means to seek a remedy until the winter of 2014 at the earliest. As the action against Van Dusen was commenced in August 2015, it was well within the two-year limitation period.

Presley v. Van Dusen is a further example of the “appropriate means” test in subsection 5(1)(a)(iv) of the Act emerging as a key factor in determining when a limitation period has been triggered. The Court of Appeal has been active in deciding limitations cases to clarify when it is necessary to bring a lawsuit to remedy a wrong. The Court has consistently exhibited a desire to minimize the need for litigation. Presley v. Van Dusen now makes clear that a service provider’s promise to repair may postpone the time limit for a plaintiff to sue both the defendant promisor as well as a co-defendant that had no communication with the plaintiff and made no such promise.