You are here:
Printable PDF 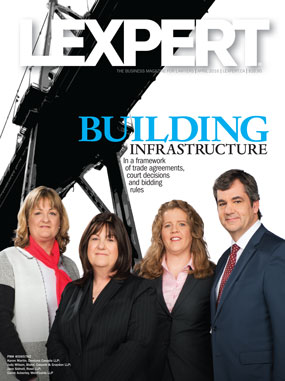 Glenn Ackerley, partner and Chair of the Construction practice at WeirFoulds, is featured in the cover article “Building Infrastructure: The Legal Framework for Canada’s Push”, in the April 2016 edition of Lexpert.

The article focuses on Canada’s infrastructure industry, and how it is now poised to benefit from the increase in federal stimulus spending that the Trudeau government promises to fund. This will be a continuation to the Public-Private Partnership (P3) infrastructure boom that has occurred over the past few years as P3 projects have expanded to include waste-water treatment plants, LRT projects and power projects.

Glenn discusses the Construction Lien Act, and how the construction industry in Ontario is awaiting possible changes to the Act which has been under review by an expert panel for the past year.

He says the expert panel recognizes that there’s a strong desire from the trade contractors for prompt payment legislation. “But at the same time they’re balancing the interests of others in the industry with that. The issue of timely payment will be addressed in some form. Does that mean statutory payment periods? Yes, perhaps, but with exceptions for certain types of projects. For example, statutory prescription may not apply to home renovations.”

While sub-contractors would be pleased, says Glenn as well, “on the owner’s side it would mean more attention would have to be paid to alternative arrangements. What money retention regime would they have to use as an alternative for enforcing warranty work and correcting problems if they don’t have the hold-back available to do that? So in some ways, it would solve one problem but create another.”

Glenn Ackerley practises construction law, representing clients from across the construction industry, in all aspects of projects and construction-related disputes. Most often Glenn fills the role of a “project lawyer”, providing ongoing advice from the start through to completion of a project.

***Since the interview took place, the expert panel received an extension until the end of April 2016.